At first glance, this looks like it’s going to be a really long post.  I promise it’s mostly pictures.  We all like pictures, right?  Right.  Moving on…

In case you didn’t know, Trader Joe’s has been ON FIRE this year with new products and awesome things.  Before we moved to our new apartment, I would go to Trader Joe’s every once in awhile.  Not because I didn’t like it but it was a little farther than I wanted to go to get my things.  Well, now that we live closer I am there every week.  Sometimes twice a week.

I thought I would do a post of all my favorite Trader Joe’s things (please start singing “My Favorite Things” from Sound of Music) so you can see what I pick up.  Some of the things I get are old standbys but a lot of them are brand spankin’ new.  If you have a Trader Joe’s near you, run don’t walk and get all the things.

You won’t regret it!

Produce: Honestly, I don’t buy a ton of fresh produce from Trader Joe’s because it’s cheaper and more abundant at my other grocery store stops. But I do get these often. 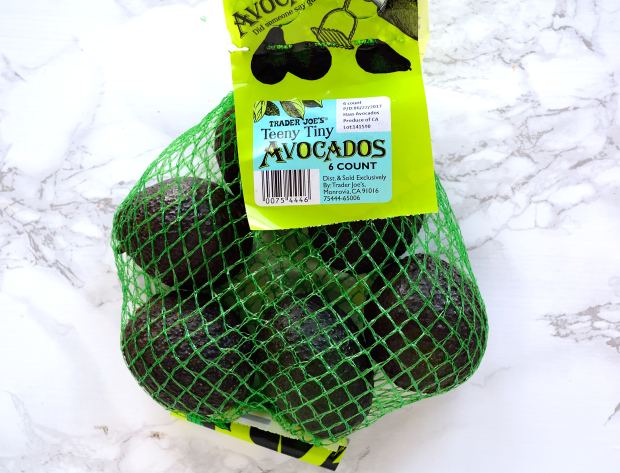 Teeny Tiny Avocados- I mentioned these on Instagram (I think?) but I love them!  These tiny avocados are the perfect one person serving and I use them a lot in my smoothies or as a salad topper.

Oils & Seasonings: Trader Joe’s always has a bunch of fun seasonings/oils and I feel like I find something new every time I walk down the aisle.  These are my favorites for the moment, though.

Olive Oil Spray- I absolutely love this olive oil spray!! Why? Two reasons.  First, it contains NO propellants.  Literally, the only thing in this is extra virgin olive oil.  That is really hard to find.  Second, I end up using a lot less olive oil because I don’t just “eyeball” it and throw in like six tablespoons from the bottle. 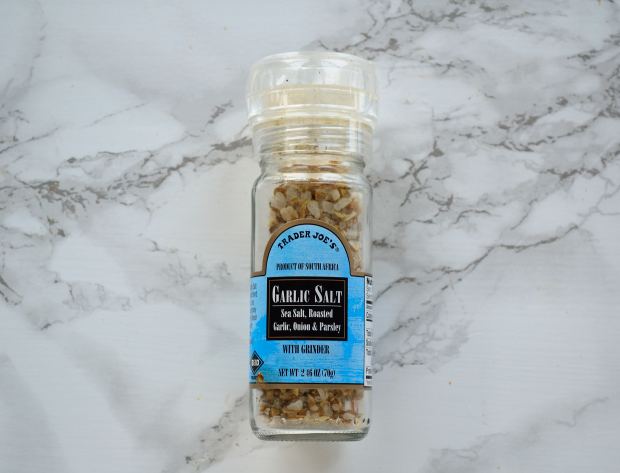 Garlic Salt- I’ve used this garlic salt for years and it’s still one of my favorite seasonings.  It has garlic, salt (duh), onion, and parsley and it’s pretty perfect for any situation.  I like it on eggs and avocado toast.  With my teeny tiny avocado of course!

Onion Salt, Seasoning Salt, Everything But The Bagel- This is like the holy trinity of seasonings in my kitchen.  All three are new to Trader Joe’s this year and all three are awesome!!! I’ve raved about them before but I’m going to do it again.  None of these have weird ingredients and all of them make any dish you use them in fantastic.  I use at least one, if not all, every day.  From roasted vegetables to salad dressing to guacamole, they are delicious no matter what! 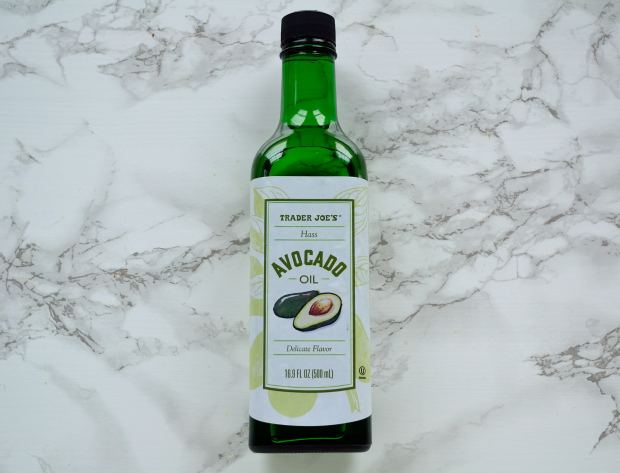 Avocado Oil- Avocado Oil is expensive but I really like its high smoke point.  I’ve tried a few brands from other places but then saw Trader Joe’s came out with their own.  It’s $8.99 for 16.9 fl oz, so still not super cheap but better than some I’ve seen.  It’s great in homemade mayo and roasting vegetables.

Beverages: I don’t drink much other than water, tea, and coffee…. so that’s what I get at Trader Joe’s!

King Coconut Water- I’m not a big fan of coconut water on its own, but I do like it in smoothies.  Which is where I use these King Coconut Water tetra paks.  I tried getting a big thing of coconut water but I didn’t use it fast enough before it started smelling a bit funny.  So I like these single serve packages because one makes me about a week of smoothies (I like mine thick like soft serve) AND they are only $1.99.

Coconut Cold Brew Coffee Concentrate- If I could have angels singing right now I would.  I don’t know what kind of heavenly magic TJ’s used to make this but my morning RFL is ever thankful.  I use this most mornings and I love that all I have to do is boil water and add a little concentrate and I’m ready to go.

Espiral Rose- I don’t drink a ton of adult beverages, but summertime begs for cold glasses of rose.  I picked this up because it was $4.99 and the sign said it was bubbly.  Cheap and has bubbles?  Sold.  It’s now a summer staple.

Grocery & Baking: I like going to Trader Joe’s each week to see if there are any new fun things and I’m usually rewarded with something fun.

Coconut Milk- I use coconut milk for a lot of my cooking and when I don’t want to make it myself, I usually get the Thai Kitchen full-fat coconut milk in a can.  I like Thai Kitchen, but it can be pricey and it does have guar gum.  Which isn’t terrible but if I could I would avoid it.  Enter Trader Joe’s.  Their canned milk is cheaper and has no gums or thickeners.  It isn’t as thick as Thai Kitchen, but it works pretty well in most recipes.

Coconut Cream- Same as above.  Thai Kitchen is my usual go to, but their canned coconut cream is WAYYYYY more expensive than Trader Joe’s.  And no thickeners. 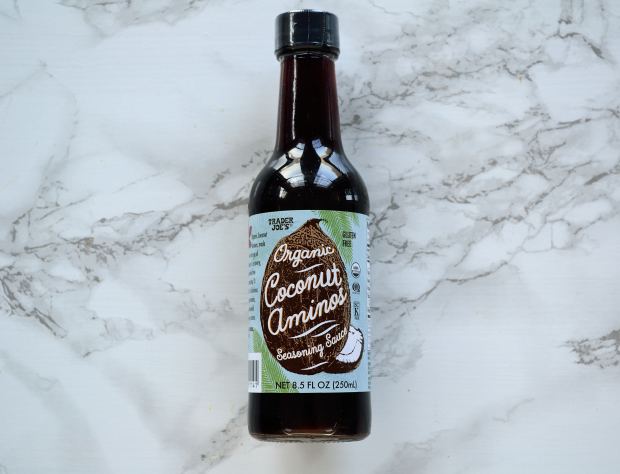 Coconut Aminos- I apparently have a thing for coconut because this is like the fifth thing with coconut on this list…. Anywhoo, I was super psyched when my Trader Joe’s FINALLY had this because an 8 oz bottle of the brand I usually get is around $6.99.  Trader Joe’s version?  $2.99 for the same amount with the same ingredients. 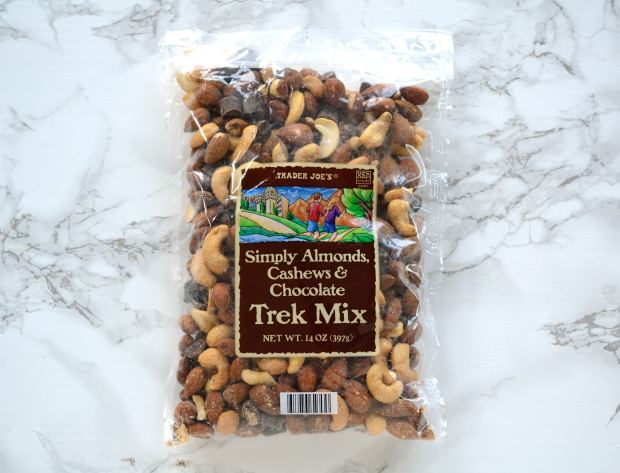 Trail Mix- This isn’t a new find but I get it for my husband to take to work as snacks.  I like that there isn’t a ton of added sugar and he likes that he gets to eat chocolate every day.  Win-win.

Green Jackfruit in Brine- Again, I need the angel chorus.  I almost squealed with joy when I found this.  Normally I have to order jackfruit on Amazon because I can’t find it anywhere near me.  And usually, it’s around $7-8.  Trader Joe’s saves the day with their $1.99 jackfruit and the world rejoices.  Or at least I do. 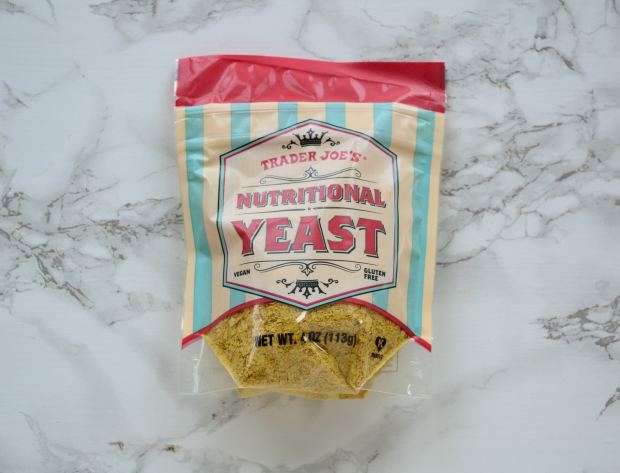 Organic Tahini- I’ve started using tahini in my smoothies and salad dressings a lot because I like the earthy flavor it adds.  Oh, and hummus cause duh.  $3.99 at my Trader Joe’s.

Coffee Flour- This is a new find for me and I’m not entirely sure how to use it yet.  I’ve added a little to my smoothie but I want to try baking with it.  I’ll report back when I finally do.

Frozen Foods:  Trader Joe’s has a lot of fun frozen items, but I mostly like their vegetables because it saves me time in the kitchen. 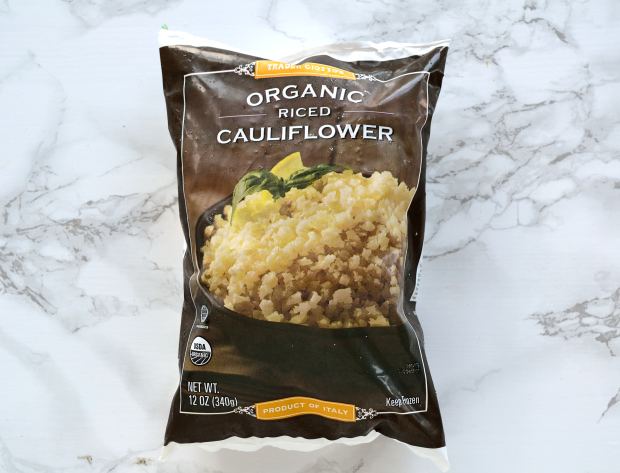 Cauliflower Rice- I always have at least two bags in my freezer.  One for my smoothies (yes, it’s awesome no it isn’t gross) and one for quick side dishes.

Fire Roasted Bell Peppers & Onions- This is another delicious time saver in my kitchen.  I add it to fajitas, tacos, casseroles, and this recipe.  I love the fire roasted flavor because it makes me feel like I have a grill even though I don’t.

Fire Roasted Corn- Because fire-roasted > than not fire roasted.

So, that’s my usual Trader Joe’s haul.  I don’t buy these things every single time I go there, but I might stock up on a few things that I know my store runs out of fast when I do see them.

What are your favorite Trader Joe’s finds?

One thought on “My Trader Joe’s Favorite Things”