I don’t know about you, but I had a jam packed weekend!  Last week Adam was able to get me a free entry into the Chicago Hot Chocolate 15k/5k race and the race was this Sunday.  I had wanted to run this race, but found out about it too late and the race fee was just a little too much for us so I was super excited when I found out I would get to run.  This was my first Chicago race and it was a pretty good experience.  On Saturday we went to breakfast at Anne Sathers Bakery and had a delicious meal and then we headed to the McCormick place to check out the race expo and pick up my bib.  We of course stocked up on all the free goodies and Adam had copious amounts of chocolate.  I have never been in a race this size so it was a bit overwhelming to see so many people!  While we were downtown, we also went to a modern photography exhibit, hit up Barnes and Noble, and then headed back to our neighborhood and did a little shopping.

Adam’s breakfast which was 2 cinnamon rolls stuffed with mascarpone. He may have slipped into a sugar coma…

At the race expo

Sunday morning we got up bright and early to head to the race.  It was just a little (ok a lot) chilly and because I was in the second wave of runners we ended up standing around for a little over an hour.  I will admit, I was slightly cranky by the time that I finally got to the starting line but that was mostly because my hands and feet were blocks of ice!  Once I started running though I was able to warm up.  It was really neat to run through downtown Chicago, but I did have to fight through the slower runners/walkers.  Once I got used to weaving in and out of the walkers, it was really cool to run through streets that are usually busy with cars.  I ended up with a time of about 30 minutes and while that is a little slower than my normal pace, I was still pretty happy with my finish.  Next year I hope to run the 15k part which will be my longest race yet.

Up early for the race! 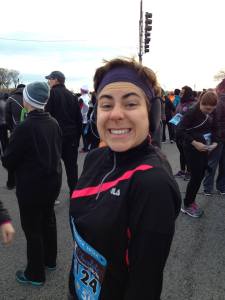 Trying to stay warm while waiting to run!

Ok, now for the mushy part of my post today.  Today is Adam and my two year anniversary.  I know it’s cliche, but it feels like it was yesterday that I was getting ready to walk down the aisle.  The memories from that day are so vivid in my mind and I still have to pinch myself to remind me that it actually happened.  I got to marry the man of my dreams and these past two years have been amazing. 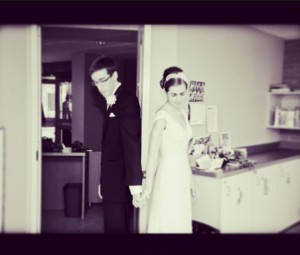 Adam supports me in everything I do, plus he wakes up at 5:30 on a Sunday to come and stand out in the cold while I run a race.  He loves me unconditionally and accept all my little weird quirks and shortcomings.  He makes me laugh daily and always puts a smile on my face even when I’m having a bad day.  Whether we are out and about or sitting quietly next to each other on the couch reading, I enjoy each minute with him.  I’ve heard that the first two years of marriage are some of the hardest, and while every single second isn’t absolute perfection, I’m still waiting for all this hard stuff that people talk about.  Maybe Adam and I are lucky, but I think it’s more that we are totally committed to each other and making this marriage strong.  We both promised that we were in this for the long haul and that no matter what we would do what needed to be done.  I mean it as much as I did two years ago, I love my husband and can’t wait to spend the rest of my life with him!  Thanks for saying I do Adam!